Ann started playing volleyball as a sophomore at Amity Regional (Amity was a 3-year senior high school) in 1980. With little experience to speak of but a great deal of talent, she tried out and won a spot as a varsity starter, no small feat on one of the top teams in the state. She was a strong side hitter with great passing skills and quickness which made her an effective player in the back row as well as the front. In fact, her combined talent and attitude earned her the team MVP award that year and she helped lead Amity to the Housatonic League title. As a junior, Ann was named team co-captain and helped her team continue its winning ways. Amity won another Housatonic League championship and added a CIAC Class LL State Title. As a junior, Ann was chosen team MVP for a second time and was selected first team All-Housatonic League and All-State. During her senior year it was more of the same. Amity finished the season 19-3 and won a second State Championship. Ann was once again selected team MVP, All-Housatonic League, and All-State. She also played in Team Connecticut on the AAU circuit that year. Ann’s excellence in athletics was not limited to volleyball, she also played basketball and softball at Amity. In basketball she scored more than 1,300 points in three years and in ’83 was selected as a Carnation Women’s Basketball All-American. In softball, Amity won a state title in ’82 and Ann was selected to the All-State team.

After graduating from Amity, Ann attended New Hampshire College. She played four years of Division II basketball with the Penwomen. In ’87, Ann turned her athletic interest to coaching. Her first position was as the head coach of the mane’s volleyball team at Sacred Heart Universtiy where she remained for two seasons. Currently she is coaching at Coginchaug High School in Durham. She is assisting head volleyball coach Clare Matasavage and she has been the head softball coach for four years. Her softball teams have accrued an amazing 19-1 record in post season play, have advanced to the state finals all four years and have won the Class S championship three times.

In 2004, Amity Regional inducted Ann into the Spartan’s Hall of Fame and retired numbers 7 and 20 in her honor and in 2006 she was inducted into the Connecticut High School Softball Hall of Fame.

Tyson has a volleyball career rich in every facet of the game. Beginning with his days as a collegiate all star player at Springfield College, to coaching Boston College, Albertus Magnus and San Diego State University, where his teams consistently ranked nationally in the Top Ten in Division I. he received the FIVB Level 2 International Coaching certification as well as the USA Volleyball CAP 2 Coaching Certification.

Tyson founded and directed Score Promotions volleyball schools. At present he is founder and president of the Connecticut Junior Volleyball Assoc. The CJVA is a statewide program which has provided off season training for over seven thousand girls of varying skill levels. He is also owner of the Connecticut Sports Center in Woodbridge. The CSC is a 44,000 square foot facility dedicated to volleyball. 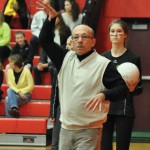 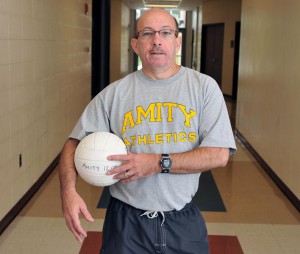