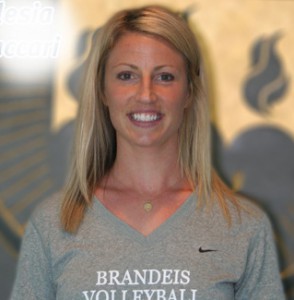 Alesia attended The Gilbert School in Winsted, where her team won the 2000 Class S Championship and were finalists in 2001. She was awarded Most Valuable Player in the 2000 tourney and All-State in 2000 and 2001. She was also named CT Player of the Year by the Hartford Courant in 2001. She then enrolled and graduated from Springfield College where she was setter for four years.

During her time running the office at Springfield, they won two NEWMAC Championships and played in two NCAA Regional Finals. She received many individual honors, including three All-Region honors, two honorable mention All-American honors, and was named NEWMAC Player of the Year in 2004. She continues to hold the all-time assist record at Springfield College with 5,196. Coach Joel Dearing stated upon her graduation that even with all of her accolades she would best be remembered for her “love of the game of volleyball.”

Alesia went on to share that passion as an assistant coach at Clarkson University in Potsdam, NY where she was part of the Golden Knights’ 2010 Liberty League Coaching Staff of the Year, helping the program in its first-ever  NCAA tournament berth. She then took the head coaching position at Simmons College in Boston, where she posted a 50-49 career record with the Sharks, reaching the Great Northeast Athletic Conference semifinals in each of her three seasons. Alesia was named the GNAC Coach of the Year in her first season at Simmons, when she led the program to a 20-10 record. In 2012, she was honored by the American Volleyball Coaches Assoc. Thirty Under Thirty Award. In 2014, Alesia was hired as head women’s volleyball coach at Brandeis University in Waltham, MA.